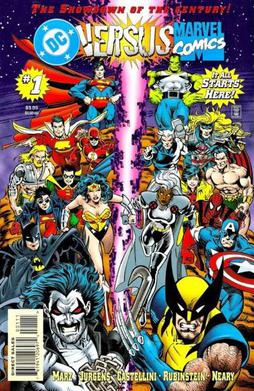 DC vs. Marvel Comics (issues #2–3 titled Marvel Comics vs. DC) was a comic book limited series crossover published by DC Comics (Detective Comics) and Marvel Comics from April to May 1996. The series was written by Ron Marz and Peter David, with art by Dan Jurgens and Claudio Castellini.[2]

Two godly brothers who personify the DC and Marvel Universes become aware of the other's existence, and challenge one another to a series of duels involving each universe's respective superheroes. The losing universe would cease to exist. The story had an "out of universe" component in that, although there were eleven primary battles, five outcomes were determined by fan vote.[3]

The six preliminary battles were:

There were five battles in which the outcomes were determined by the votes of fans:

I just so happen to have a bundle of those comics' collector editions. You can buy the bundle here.

Marvel attained six straight victories in the preliminary battles and five battles were decided by fan vote, of which Marvel came out ahead with a straight win again. Several smaller, story-driven fights occur throughout the series, none effecting the outcome.[4] The series plot does not show one side as being victorious. As part of a last-ditch effort to save their worlds, the Spectre and the Living Tribunal were able to briefly force the "brothers" to resolve the situation by temporarily creating a new universe, called the Amalgam Universe, which is occupied by merged versions of many of the heroes (such as Dark Claw, a merging of the characters Batman and Wolverine). An inter-dimensional character called Access eventually managed to restore the universes to their normal state with the aid of Batman and Captain America. The presence of the two heroes (essentially serving as the brothers in miniature, each being unique among their peers) forced the brothers to recognize how petty their disagreement truly was.

Although a victorious universe is never specifically acknowledged within the story, Marvel Comics celebrated the result by publishing a one page advert in some of their comics. The promotion featured the winning Marvel heroes: Thor, Silver Surfer, Elektra, Storm, Wolverine and Spider-man.[5]

The series was collected into a trade paperback titled DC versus Marvel Comics (collects mini-series and Doctor Strangefate #1; 163 pages; September 1996; ISBN 1-56389-294-4). Two versions of this paperback exist with one edition having DC winning three of the five fan voted battles and another version of the trade paperback with Marvel winning three of the fan voted battles. In both editions only Superboy and Lobo lose their respective bouts.

You're live! Nice. We've put together a little post to introduce you to the Ghost editor and get you…